Thanks for doing the interview Floyd. You were one of the first people to contribute to the co-op, if not the first. I was impressed and surprised when I received your trades to the co-op, you sent a lot, I was a bit overwhelmed. What started your interest in comics?

The comics racks at the stores in the 1960s. For 15 cents you could go where ever you wanted, from Batman to Spiderman, soon I folded notebook paper together and started making my own comics for my friends at age 5.

How long have you been self publishing?

Since 1979. Started with a series, sorta like the twilight zone, called Capture Imagination. That same month I created my own superhero series Dartgirl and a espionage series called Spygirls.

What made you decide to start self publishing yourself?

All the comic book buyer guides offered cheap ads. I sold mini comics for 25 cents and made a profit on each one, back then a copy was 5 cents for one side and 2 cents for the other. Comic book stores and cons were two years away, but when they started, I was in most of the shops before Pacific Comics started the wave of self publishing.

Who has influenced your style?

What tools do you use to make your comics?

What do you get out of making comics?

For years it was for the fun. 5 years ago my stuff started selling. So now I make good money from cons, where you get to meet the people who love this stuff.

What are you working on now? Anything new coming out?

Dartgirl is always monthly. Spygirls and other random titles I publish a few times a year. 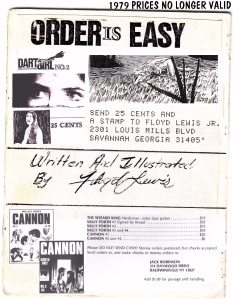 For more information and on how to order Floyd’s comix visit:

MAY 7
Floyd will be appearing and giving away comics and fan art for FREE COMIC BOOK DAY at this comic book store:

This entry was posted in Uncategorized. Bookmark the permalink.